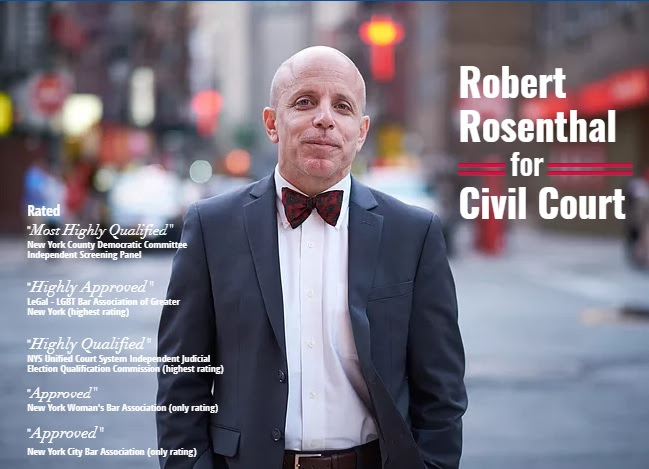 It is with great pride and pleasure that I ask you to join me in voting for Robert Rosenthal for Civil Court in the Democratic Primary next Thursday (yes, Thursday), September 13th.

As we have seen many times in the past two years, an honest judiciary that shares our progressive values is more important than ever. This is not just true at the Federal level, but also at State courts. NY judges are preventing child deportations, protecting tenants and more every day.

Robert Rosenthal is one of the finest candidates for the court I have ever seen. A brilliant attorney, Rosenthal is the only candidate in the race ever to have been found “Most Highly Qualified” by the Independent Screening Panel.

Robert has been fighting on behalf of marginalized people for 27 years.  His experience representing clients began at the Bet Tzedek Legal Services Clinic, representing indigent elderly and disabled people. Throughout his career, Robert has continued to represent and protect members of our society who have been unfairly pushed aside; no matter who they are, what they look like, or what they have – or don’t have. Robert’s work is driven by his deep-seated belief in justice, and the right to due process and a fair trial.

Robert also knows our neighborhood well. He’s lived in Lower Manhattan for over 20 years, and has been deeply engaged in many of our neighborhoods’ struggles. That’s why Robert has been endorsed by local leaders including Carlina Rivera, Harvey Epstein, Yuh-Line Niou, Gale Brewer, Nydia Velazquez, Brad Hoylman and many others. Robert has also been endorsed by every local Democratic organization Lower Manhattan, including the Downtown Independent Democrats, CoDA, Grand Street Democrats, Lower East Side Democrats, United Democratic Organization, Village Independent Democrats, and the Village Reform Democratic Club. I know of no other candidate who has received such a unanimous vote of support from local Democratic activists.

Robert’s opponent in this race is a very well-funded corporate lawyer with no ties to Lower Manhattan, who has never been found qualified to serve by a screening panel. But money talks, and every vote will count on Thursday.

One final personal note.  I have known Robert Rosenthal for about six years.  In that time, he has become a friend and a role model. Robert has deep compassion and respect for every person he meets, and every person he has not met.  He knows in his bones how much the legal system means to the lives of the people and families brought into it.  And he has a deep, abiding, love of New York City.  If you share my values at all, I assure you that Robert Rosenthal will make you proud as a Civil Court Judge.

Polls will be open on Thursday, September 13th from 6:00 a.m. to 9:00 p.m. Find your poll site at: https://nyc.pollsitelocator.com/search. Please join me there in voting for Robert Rosenthal for Civil Court.